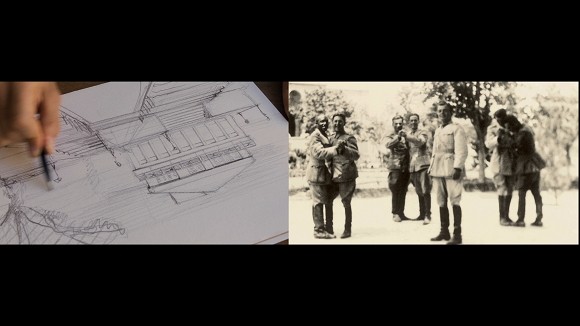 Yael Bartana and Dor Guez curate a film program that proposes diverging images of the contemporary concept of Europe. The two artists present their own work, which has each addressed the topic from different perspectives, as well as contributions by Jananne Al-Ani, Khaled Jarrar, Adrian Paci, and Wael Shawky. The screening will be followed by an open discussion.

About the program’s curators:

Yael Bartana’s films, installations and photographs explore the imagery of identity and the politics of memory. Her starting point is the national consciousness propagated by her native country, Israel. Central to the work are meanings implied by terms like “homeland”, “return” and “belonging”. Bartana investigates these through the ceremonies, public rituals and social diversions that are intended to reaffirm the collective identity of the nation state.

In her Israeli projects, Bartana has dealt with the impact of war, military rituals and a sense of threat on every-day life. Between 2006 and 2011 she was working in Poland, creating the trilogy And Europe Will be Stunned, a project on the history of Polish-Jewish relations and its influence on the contemporary Polish identity. The trilogy represented Poland in the 54th International Art Exhibition in Venice (2011). In recent years Bartana has been experimenting and expanding her work within the cinematic world, presenting projects such as Inferno (2013), a “pre-enactment” of the destruction of the Third Temple, True Finn (2014), which came into being within the framework of the IHME Festival in Finland, and Pardes (2015), which was shot during a spiritual journey in the Amazon rainforest in Brazil. Her latest work, Simone the Hermetic, is a site-specific sound installation that takes place in future Jerusalem.

Dor Guez is an artist and a scholar who lives in Jaffa. In 2009, he established the project “Christian Palestinian Archive”, which is devoted to this minority. Guez’s work has been the subject of over 25 solo exhibitions worldwide, with his most recent at the ICA in London. Past solo exhibitions have been held at The Rose Art Museum in Boston, Artpace, San Antonio, The Mosaic Rooms, Centre for Contemporary Arab Culture, London, The KW Institute for Contemporary Art, Berlin, and Tel Aviv Museum of Art. Guez's work has been included in numerous international exhibitions and biennials including the 12th Istanbul Biennial, Istanbul; 17th and 18th International Contemporary Art Festival, Videobrasil, São Paulo; the 3rd Moscow International Biennale, Moscow; Biennale Benin, Cotonou; Palais de Tokyo, Paris; Tokyo Metropolitan Museum of Photography; and MAXXI Museum, Rome. Guez also serves as Head of the Photography Department at the Bezalel School of Art and Design, Jerusalem. His research project on archives, Pre-Israeli Orientalism, is due to appear this coming year.

While preparing her IHME Project, 'True Finn', Yael Bartana invited people living in Finland to take part in a poetic experiment, the creation of a utopian reality. A group was due to come into being, in which each person had a different ethnic, religious and political background. As a result of an open call, eight Finnish-resident individuals came to live together for seven days in a house in the Finnish countryside. Life, discussions and specifically designed assignments were filmed, with the edited material now forming the core of this artwork.

What happens when these people live together for a week and re-define “Finnishness”, and themselves in relation to others? The artwork plays with questions about identity: How does national identity operate as a means of inclusion and exclusion? What mechanisms exist in this context in Finland? What are we talking about when we talk about Finnish identity right now? Can an immigrant become a true Finn?

Dor Guez, The Architect, 2015
Guez’s 2-channel video installation comprises the second of the five-part project, The Sick Man of Europe, a term taken from the late 19th century to describe the collapse of the Ottoman Empire. Guez uses it to examine the military history of several states in the Middle East through the stories of artists who were recruited to the army and took part in various wars throughout the 20th century. The wars left their mark on the artists, who stopped creating work once they became soldiers. The video, The Sick Man of Europe: The Architect focuses on the story of Kemal P., an architecture student who was recruited to the Turkish army just after he graduated. A two-channel video focuses on 13 of Kemal’s photographs from 1939 that document the Turkish Republic’s Victory Day Parade in Ankara in August of the same year, and the funeral of the secularizing republic leader, Kemal Ataturk, that took place a few weeks later. By photographing buildings, monuments, and squares, Kemal P. follows the architectural changes that took place in Turkey through its transformation from an empire to a republic, from Ottoman to Turkish. Parallel to documenting the historic evolution of Turkey, a story of friendship unfolds in the photographs between Kemal and Muhammad, both revealed as great admirers of Ataturk and the new, secular Turkey.