Due to very limited capacity, tickets will be available at KW’s box office only from 7 pm. Tickets will be sold on a first come, first served basis. We ask for your understanding. 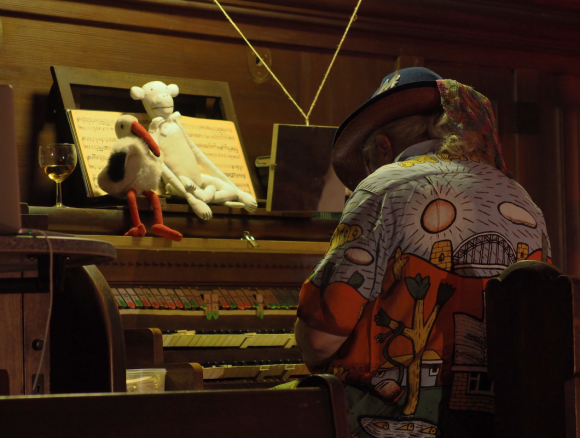 A contemporary of Philip Glass, Terry Riley, Phill Niblock, and Tony Conrad; Charlemagne Palestine creates intense, ritualistic, continuum music for electronic sound sources, bell carillons, pipe organs, pianos, voice, and other keyboard instruments since the 1960s. A composer-performer originally trained to be a cantor, and then a carillonneur; he always performs his own works as soloist. His electronic continuums were his first major pieces. He early on began developing sonorities especially with large numbers of electronic sound oscillators and filters developed by Moog, Buchla, Serge, Arp and Oberheim. Palestine stopped performing from the early 1980s till the mid 1990s and devoted himself entirely to his forms of plush animal divinity altars as multi-media sculptures and installations. These altars are always an integral ingredient in Palestine’s performances. Since his return to performing Palestine has reissued works from the 1960s and 1970s on CD and vinyl, created and recorded many new works and has collaborated and recorded with other musicians, such as Pansonic, Simone Forti, Tony Conrad, Rhys Chatham, Perlonex, Gol, among others. He now performs regularly at festivals as well as presenting his multimedia installations worldwide.