Alongside its exhibition program, KW Institute for Contemporary Art is continuously pushing beyond the confines of the physical building through its commission program. Throughout the years, these commissions have taken on numerous formats, varying from the infamous slide Valerio II (1998) of Carsten Höller to Renata Lucas’ intervention Kunst-Werke (Cabeça E Cauda De Cavalo, 2010), and Dan Graham’s pavilion (1999) which houses the Café Bravo. These commissions are produced in order to present a different temporality and dedication to art production, in which the environment and architecture of both institutions—KW and the Berlin Biennale for Contemporary Art—is challenged. 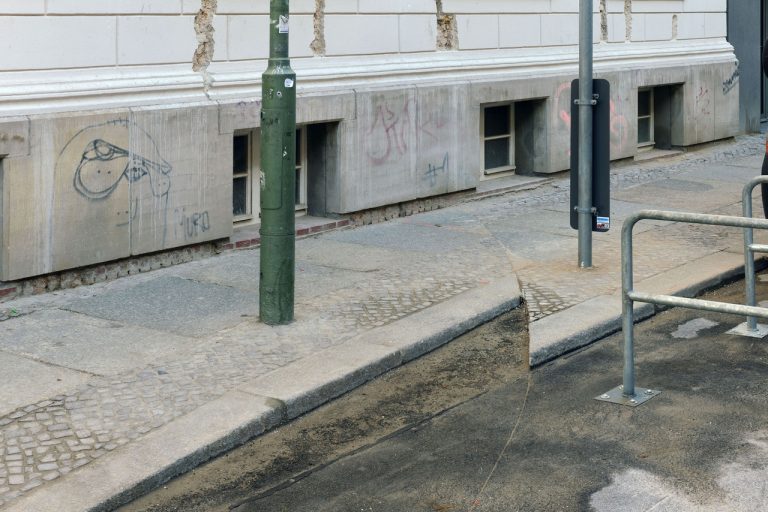 Renata Lucas tilted the sidewalk exactly 7.5 degrees clockwise in a semi-circle around the entrance gate of KW. The work called Kunst-Werke (Cabeça E Cauda De Cavalo), 2010 was part of a series of interventions Renata Lucas undertook during her exhibition as the recipient of the Schering Stiftung Award.

Auguststraße, in front of the entrance gate 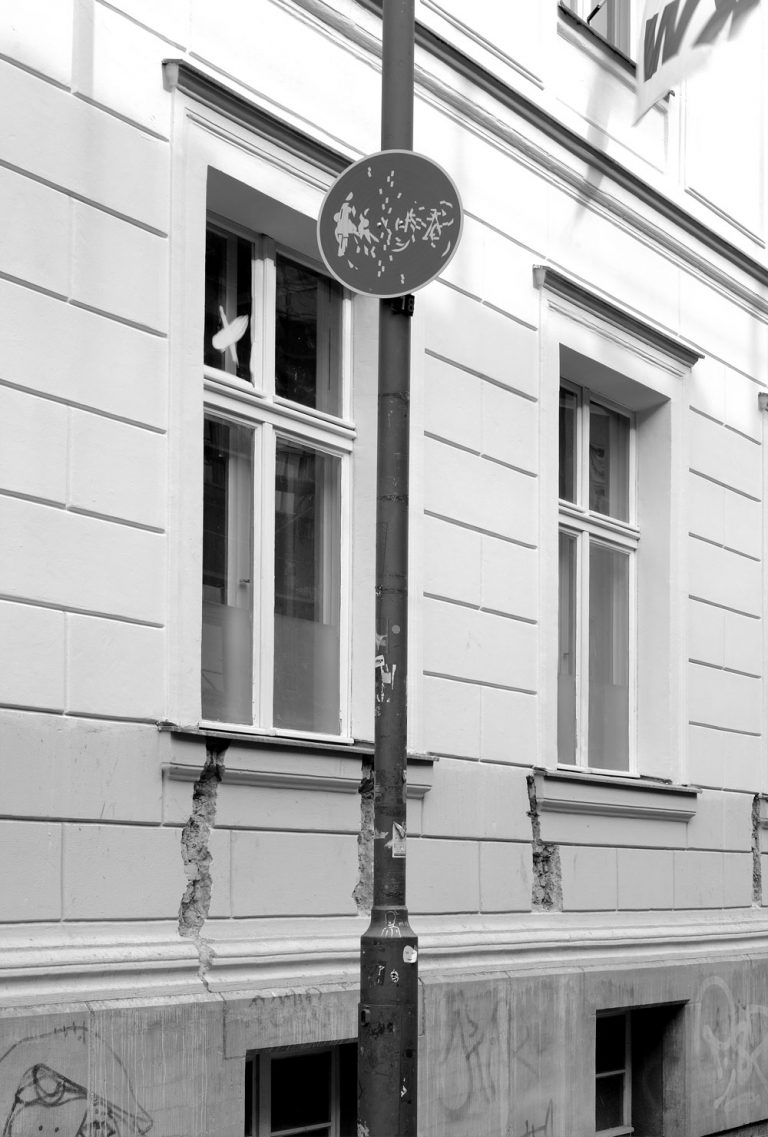 Albrecht Schäfers Verkehrsschild #6, 2007 was installed in 2008 as part of Schäfer’s exhibition at KW. The Verkehrsschilder [traffic signs] are part of a group of works in which everyday materials and objects change their inner logic, using only the original materials at hand to produce a new meaning. The sign’s rotation can also be seen as an analogy of the movement and acceleration of traffic. 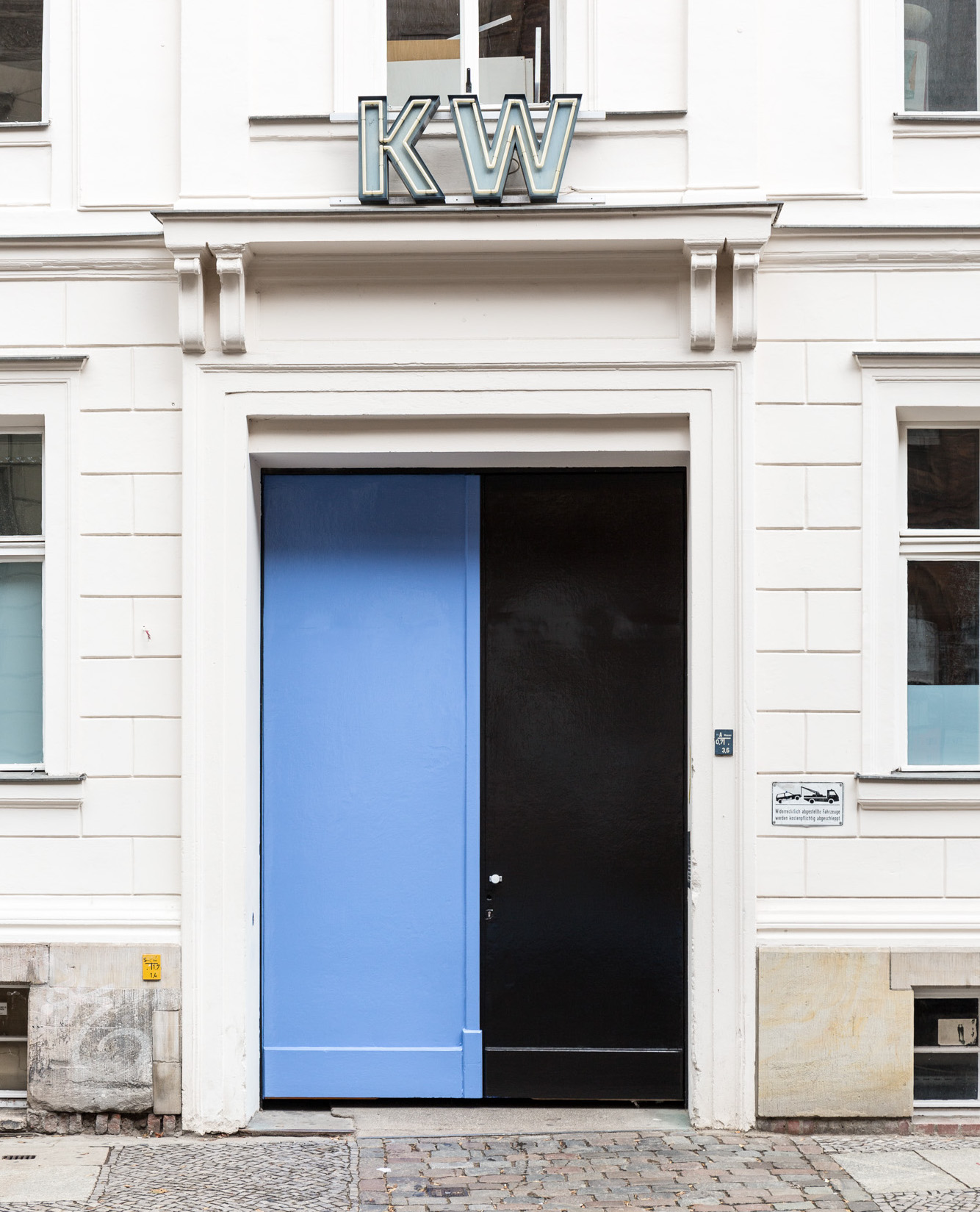 The concept of time, more specifically the dualism of day and night and the lightness and darkness that signifies its passing, is often explored in the artists work, which also aims at underlining the experiential relationship between the viewer and his/her surroundings.

In the 1970s, Philippe Van Snick (born in 1946, in Ghent, BE) developed an interest for systematic methodologies, which lead him to formulate a consistent color and numeral system. This allowed him to create a steady body of work in the following decades. For Van Snick, light and color are both scientific, objective descriptions and subjective codes inspired by our everyday experience.

By finding itself in the realm between painting and sculpture, the predominant concerns of modernism are invoked by questioning the autonomy of the artwork and geometric abstraction as a universal language. For KW, Van Snick will continue his investigation of the dualism of day and night and implement a black and white color scheme onto the entrance gates of the institution.

On the ceiling above the entrance gate 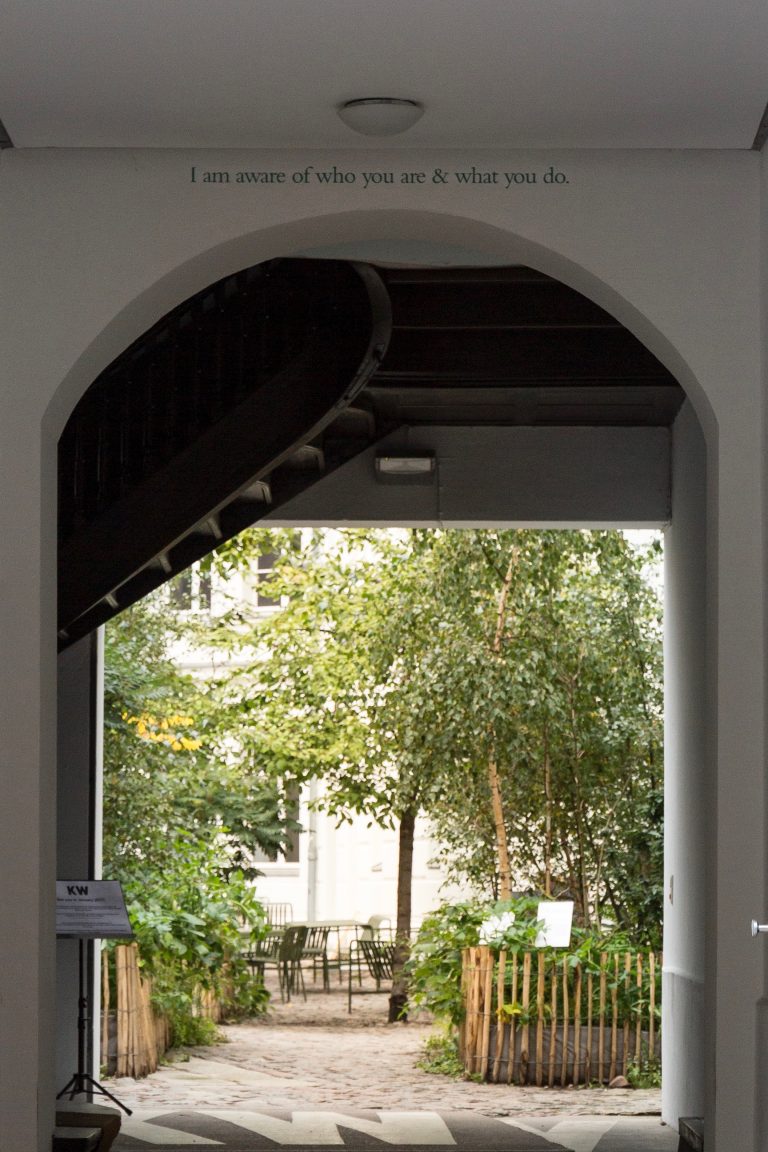 The work Letter (Number 1) welcomes each visitor as he or she enters KW. The text „I am aware of what you are & what you do“ was first exhibited during the 1. Berlin Biennale, which took place in 1998 at the Academy of Arts, and later came to KW. The writing belongs to a cycle of works titled Letters, which Gordon began in 1991. 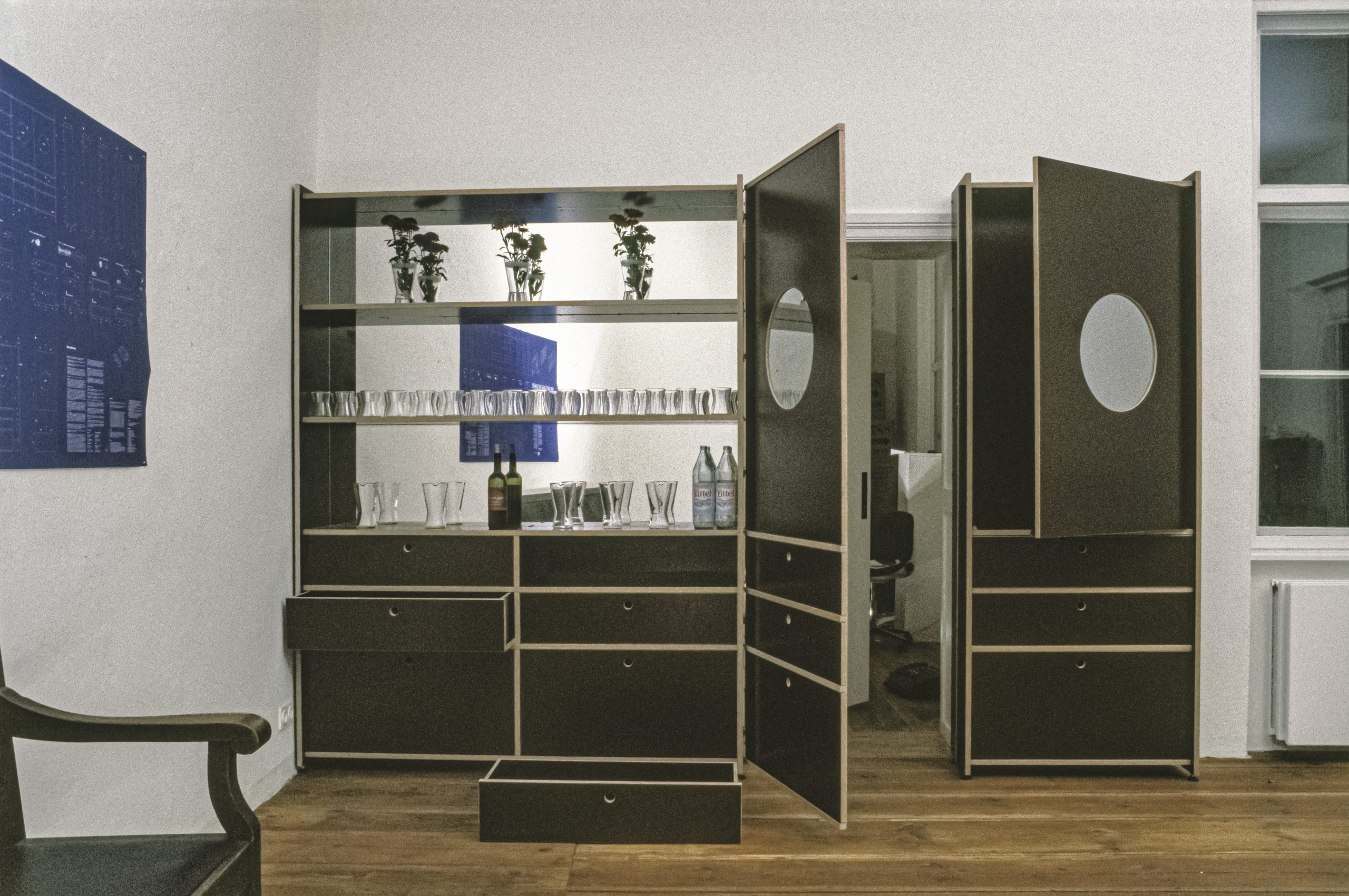 In her work, Andrea Zittel reveals a social boundary. The wooden wall system located in one of the typical old-fashioned apartments in Berlin creates a gateway of sorts between the manorial residential area and the former maids chambers. The conventional architectural meaning is no longer relevant, but Andrea Zittel’s work maintains its original function from falling into oblivion and simultaneously exposes a hierarchical passage. Dr. Jekyll and Mr. Hyde was build for the first Berlin Biennale and has since been on view in the front building of KW.

Above the entrance of KW’s courtyard 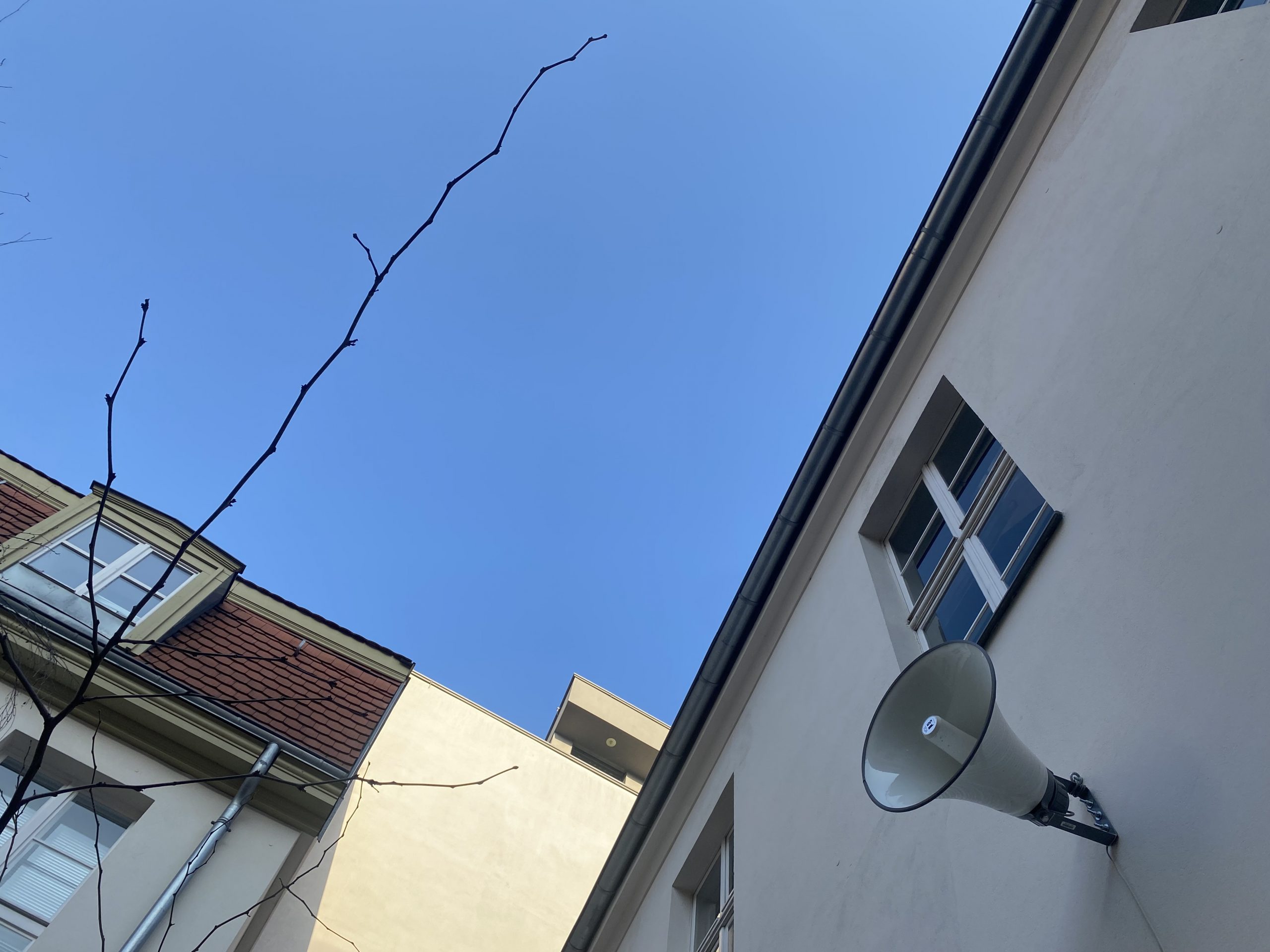 Philipsz shapes sounds that are able to unlock memories and emotions in an exceptional way. She develops sound installations whose numerous layers are released through our movements and contemplation. Set site-specifically, her sound works deal with matters such as melancholy, loss, and mourning.

Above the entrance of KW’s courtyard is a trumpet-shaped loudspeaker, which intermittently broadcasts a song titled Rosa. The song is a hymn commemorating the German revolutionary Rosa Luxemburg and her partner Karl Liebknecht, which is often chanted at political demonstrations. Philipsz’s voice is neither sorrowful nor passionate but is reminiscent of a more private moment, as if we are overhearing someone singing to themselves. While Philipsz produced the work during her residency at KW in 2002, Rosa will be officially inaugurated on the January 15, 2021, mirroring the date Luxemburg and Liebknecht were murdered in 1919. Rosa will be played in the courtyard once a day at 12 am. 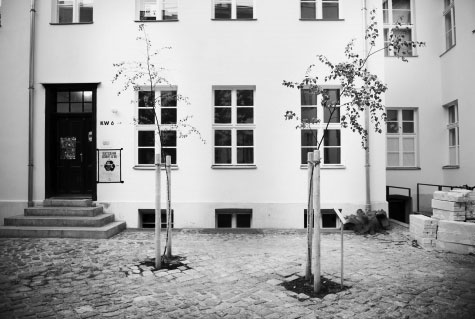 The birch trees in the courtyard of KW are part of a “living archive” by polish artist Lukasz Surowiec, which consists of hundreds of young trees that come from the area of the former concentration camp Auschwitz-Birkenau. On the occasion of the 7th Berlin Biennale these birch seedlings were distributed as a symbolic gesture throughout the urban area. They become an embodiment of the traumatic past of the place at their respective destination which is usually set in an historical connection to the Holocaust.

The garden installation Archipel (2017) breaks up the five existing „plant vessels“, which have been realized for the 9th Berlin Biennale for Contemporary Art in May 2016, and transforms them into an archipelago. Six small islands are intended to accompany the visitors through the courtyard and all the way towards the new entrance of the exhibition spaces at KW, and the Café Bravo. They appear anchored to the already existing walnut trees, crab apples and cherry trees. The plantation expands and evolves from summer throughout autumn and thins out during winter. 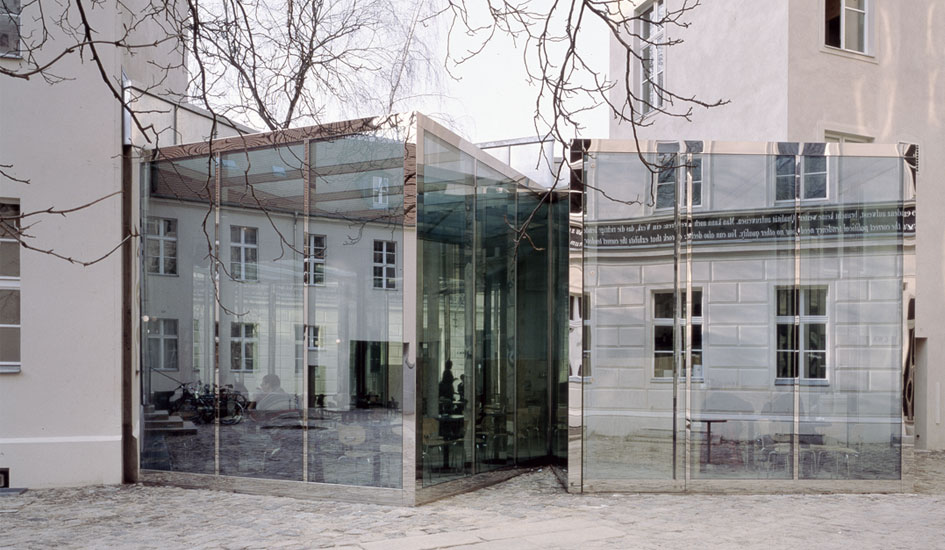 Café Bravo was designed by Dan Graham and realized with the Architect Johanne Nalbach, and opened in September 1998. The steel structure of the two mutually twisted cubes is layered with mirror polished stainless steel panels. The side surfaces are made of one-way mirror glass, and the ceiling of translucent and opaque glass. The whole body appears at times as transparent, and at others as a mirror. 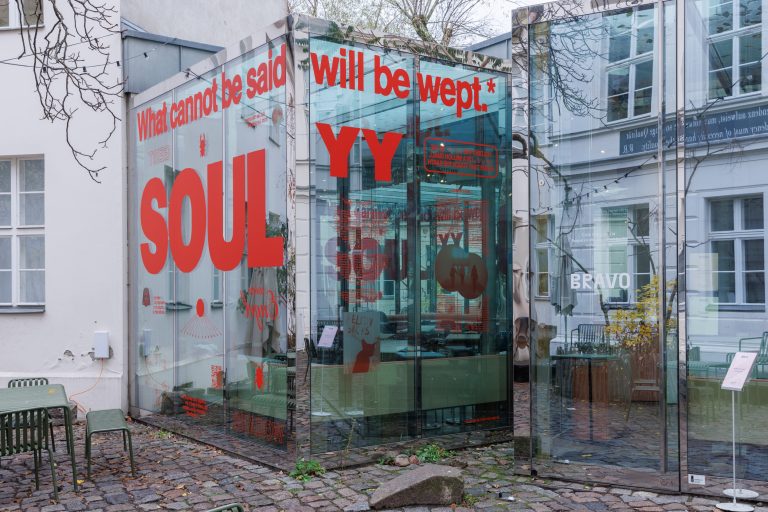 With their artistic practice, Dina El Kaisy Friemuth creates conversational environments unpacking the complexity of collectivity and belonging. With an installation on the large windows of KW’s Cafe Bravo, El Kaisy Friemuth continues to ask questions of fraught boundaries between told and untold stories, inside and outside, center and margins; it includes texts by Duygu Ağal and María Berríos.

In the courtyard, left façade 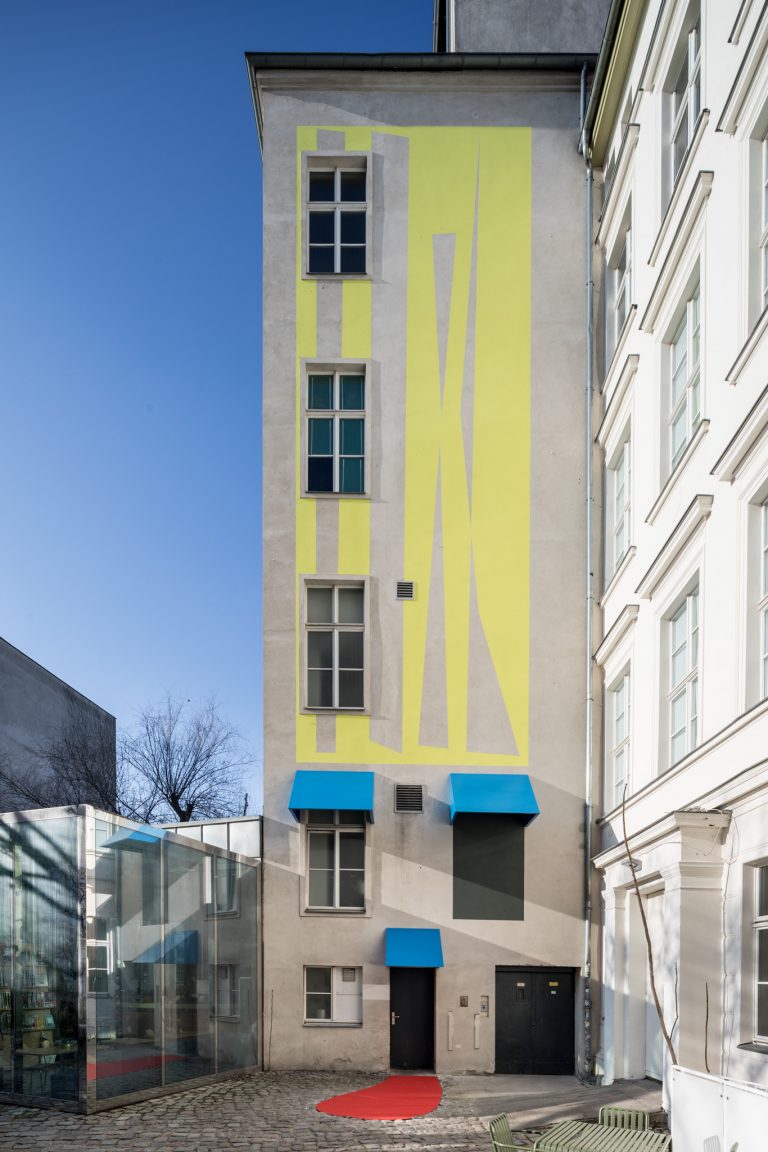 In conjunction with her solo exhibition Stepping Stairs in spring 2018, Berlin-based artist Judith Hopf realized the permanent commission Stepping Stairs for the left side of KW’s façade. A cheekily anthropomorphized face can be recognized in the Hejduk-like sunglasses, paired with a long red tongue and a blonde mop of hair that reaches into the courtyard like a ray of sunshine. Her gesture to animate the inanimate imbues it with the potential for purpose and agency.

Across the wall opposite to Café Bravo, in the courtyard 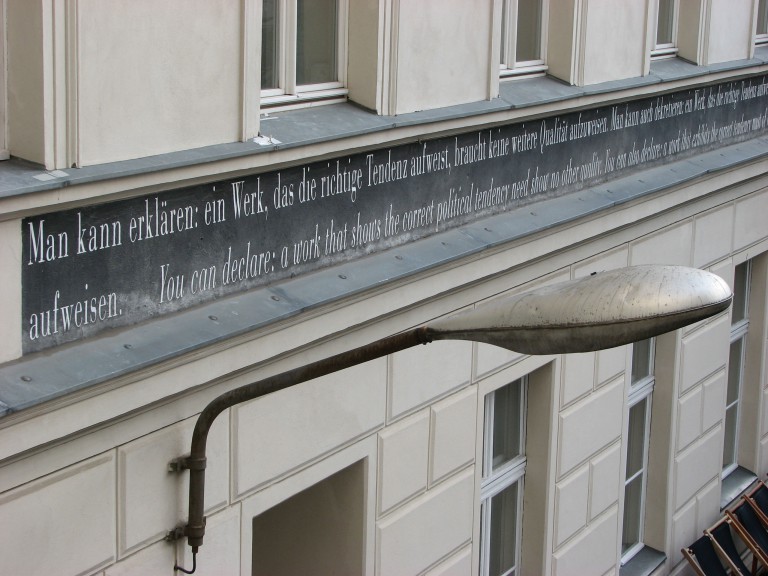 These sentences were installed by Joseph Kosuth for the first time in 1994, in the context of his exhibition Berliner Chronik (Berlin Chronicles). The phrase belongs to a conceptual work, for which the artist placed quotes by Walter Benjamin in public places throughout Berlin over nine days. The quote originally stems from the article Der Autor als Produzent [The author as producer], which Benjamin wrote during his exile in Paris in 1934. In 1999/2000 it was permanently applied onto the building wall.

Façade of KW, in the courtyard 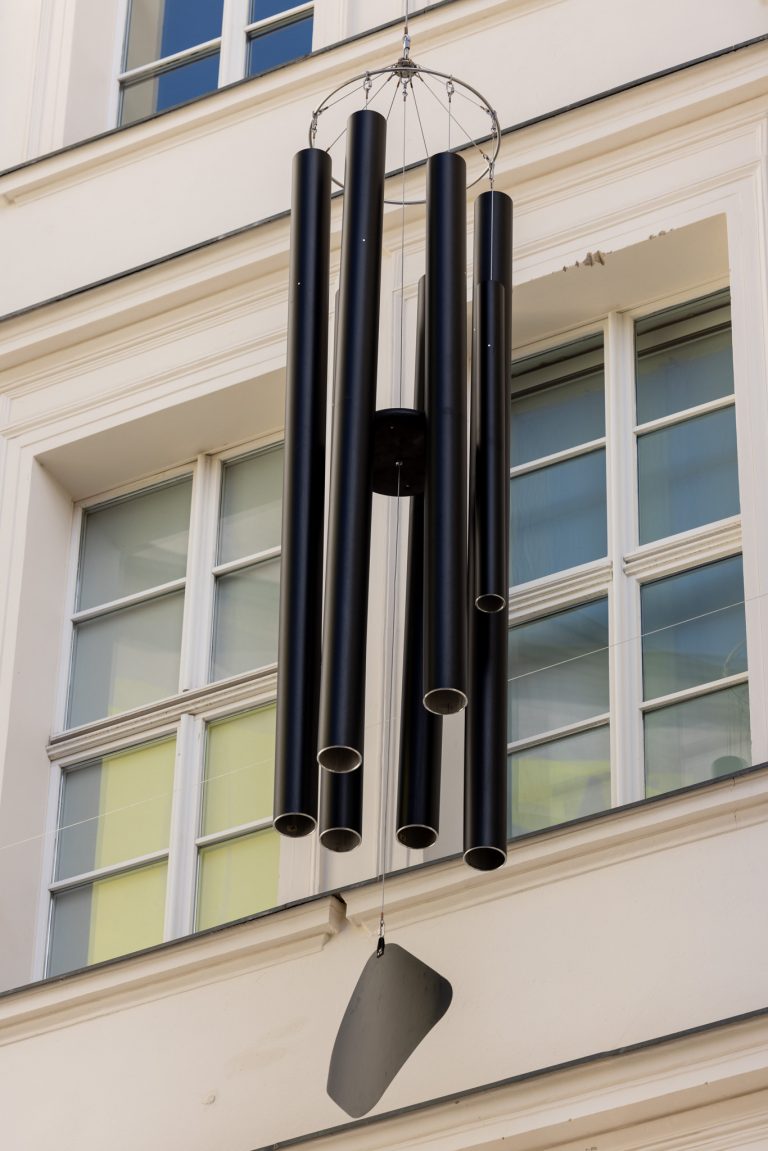 Large Dark Wind Chime, 4.3 m high wind chime in black tempered aluminium, is mounted from the façade of KW Institute for Contemporary Art. The chimes, each as large as church organ pipes, produce a deep bass, typically resonating for several minutes. Its vibrations enter the body, not just the ear. The tones seem to oscillate, like misregistered lines in a screen print.

The composition of Large Dark Wind Chime is based on the Tritone (tritonus)—the ’diabolus’ in music, which is also known as the ’devil’s interval’. Diabolus in Musica is Latin for the Devil in Music and was used to describe a musical interval consisting of three whole tones comparable to the augmented fourth or diminished fifth. It is often used as the main musical interval of dissonance in Western harmony.

In the Middle Ages, the Tritone was banned by the Church due to, as sources claim, the interval’s ability to evoke sexual desire and thus, arousing the Devil. Subsequently, the knowledge of the interval was clouded by considerable superstition and was, in conventional Western culture, associated with the wicked and the symbol of the ‘Other’.

Large Dark Wind Chime was initially developed for the 2008 Wiener Secession and installed in its iconic cupola of golden leaves to broadcast a kind of eeriness over the city Vienna. It is adapted for KW in 2022.

Klaus Weber (b. 1967 in Sigmaringen, DE) lives and works in Berlin. Working across a variety of media and spatial formats, Weber’s practice revolves around purposely manipulating everyday structures, the tracing of deviations, and the exploration of the impossible—attempting to undermine the metaphorical and actual power of a functionalist rationality. 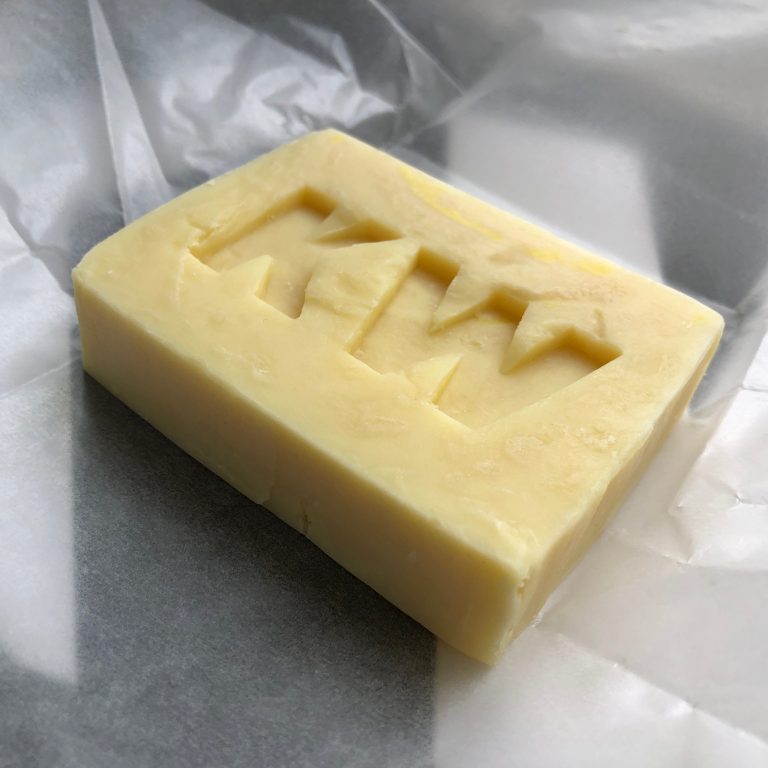 On the occasion of KW’s 30th anniversary, Tolaas developed an edition of soaps KWOPE_2021 carefully created from recorded and replicated smell molecules she has collected from the building of KW in Auguststraße 69, a former margarine factory.

Sissel Tolaas is an artist and a pioneer scholar of the science of smells. Since the 1990’s, she has devoted her practice to the exploration of the different facets, systems, and altitudes of smell, and has contributed immensely to the knowledge and cartography of smells and their importance in different sciences, fields of art/design, and other disciplines through her research. Tolaas’ work has been featured in multiple solo and group exhibitions, both nationally and internationally. From very early on, Tolaas’ practice has been entwined within the history of KW Institute for Contemporary Art, exhibiting along with fellow colleagues in 1993 and again within the context of the third edition of the Berlin Biennale for Contemporary Art in 2004. 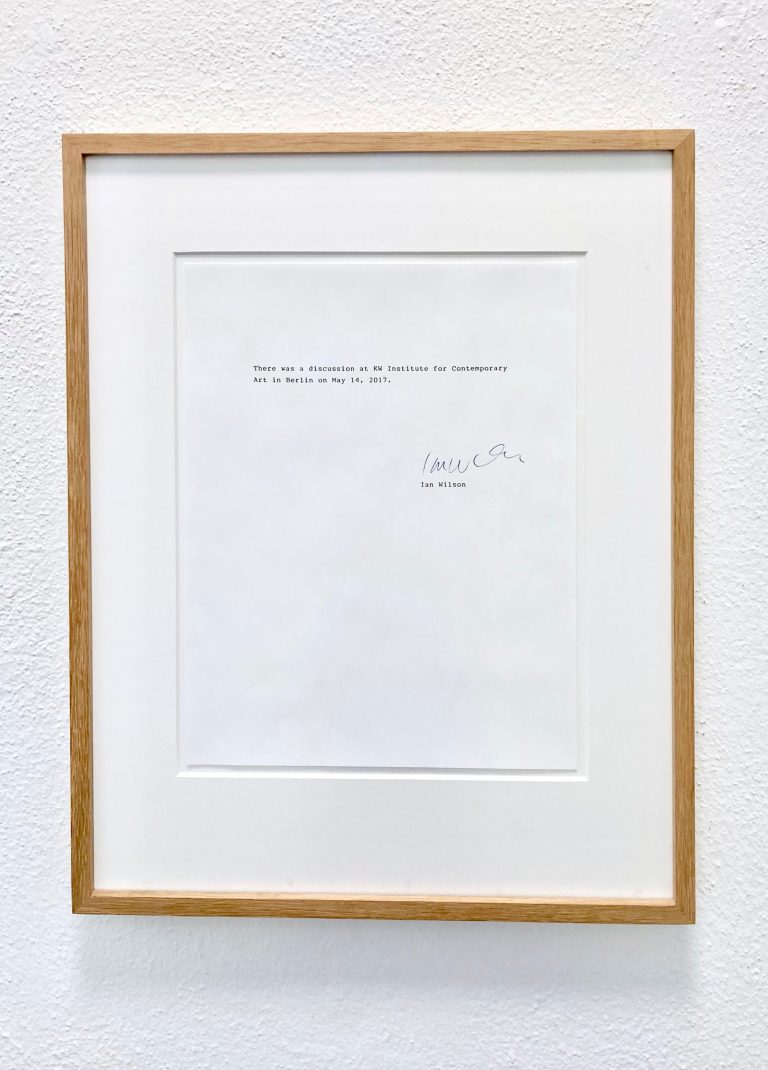 Ian Wilson is an artist whose work bears a powerful resemblance to the KW’s mission: to explore the relationship between the viewed—or discussed—and the viewer, and the urgency involved in these interactions. Wilson has been exploring spoken language as an art form since 1968. He has described his own work as “oral communication” and later as “discussion”. At Wilson’s own request, his work is neither filmed nor recorded, thereby preserving the transient nature of the spoken word.

To highlight his importance to the program, KW has devoted a solo exhibition to the artist’s work, which includes a newly commissioned and acquired work named Discussion (KW). This discussion, based on the topic of “The Absolute in Art”, took place in May 2017 at KW and reassembled the artist, the director and current staff members of the institution.

Rooftop of the main hall 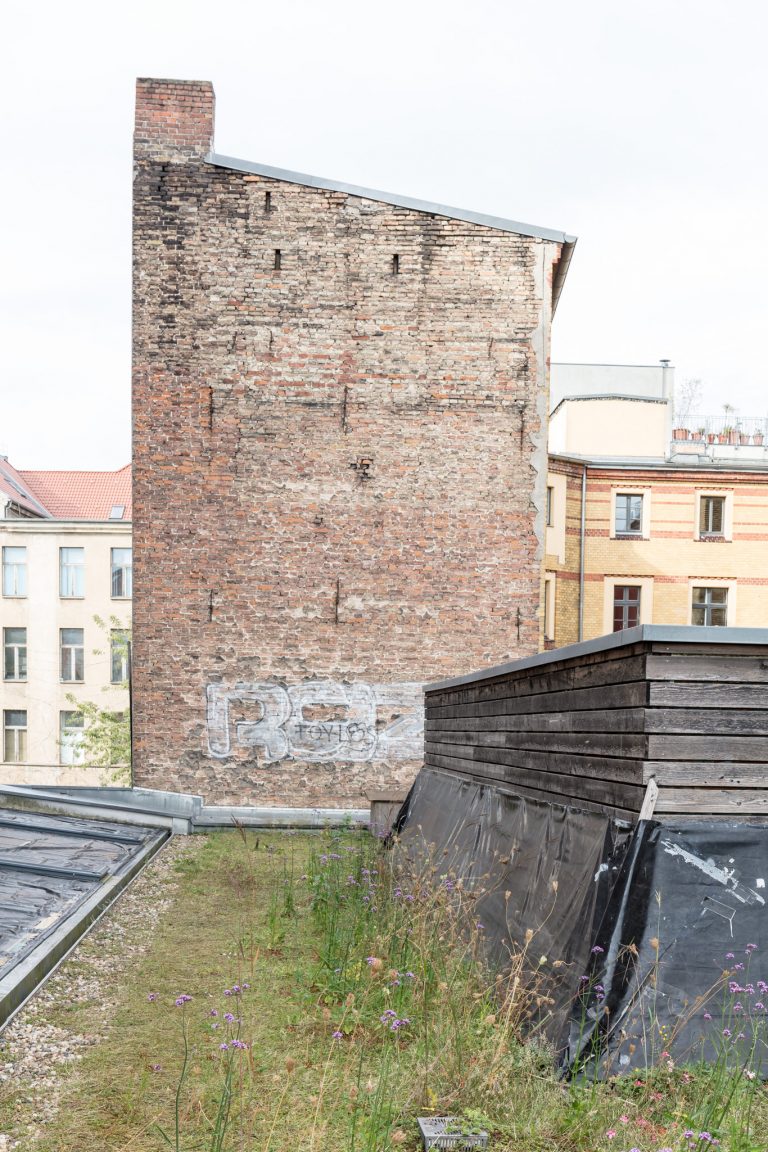 Berlin-based artist Richard Frater has constructed a garden full of wild flowers, succulents, and endangered local plants on the rooftop of KW’s exhibition hall. Although visible from the exhibition spaces, the garden was never perceived as a part of the institution, it existed as a non-space within the institutional compound.

In the late summer of 2017, for example, the pale yellow view called to mind various biologically deserted images: a harvested crop; a sun-scorched meadow; an unoccupied allotment; and the non-spaces that line roads and railways. Surveying the content at this site revealed a more enlivened situation. A thickening of wild grasses, flowers, succulent varietals, wild carrots and onions, and other anomalies such as fruit trees and pines. All mingle in the thin soil bed.

The central task was to enhance biodiversity without introducing a nurturing scheme into the existing stabilized environment. Plants will be introduced over a three year period, responding to species that can independently establish themselves there.