Dinos & Jake Chapman
What the Hell I - IX 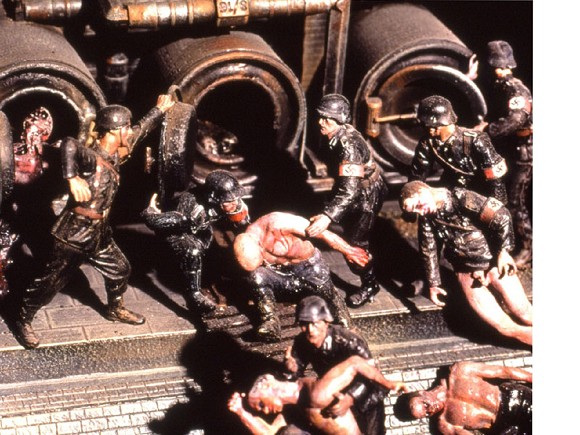 From July 16th until September 17th 2000 the KW Institute for Contemporary Art present the first part of a new major work by the British artists Dinos and Jake Chapman: the photographic series What the Hell I - IX. In addition the KW exhibit Dinos and Jake Chapman's etchings Disasters of War for the first time next to their famous exemplar, an original cycle of the Desastres de la Guerra by Francisco de Goya.

Since three years Dinos and Jake Chapman have been working on a new work complex, which comprises sculpture, film and photography. The Kunst-Werke present the first part of this work: the photographic series What the Hell I - IX, consisting of nine monumental photographs, illustrating war scenarios in pitiless clarity. What the Hell I - IX is based on the core piece of the new work complex, the gigantic, 8.5 square meter measuring sculpture Hell. The sculpture, which will be shown for the first time this autumn as part of the Royal Academy exhibition Apocalypse, is a terrifying representation of the worst chapter of history: on an inverted swastika over 5000 hand-modelled and hand-painted toy-figurines have been assembled into a gruesome inferno of war and death.

During one of the most horrendous executions of WW II over 18.000 Russian soldiers were killed in a single afternoon. In times before the possibilities of gene manipulation, the Chapman brothers also see the Nazis as the initiators of eugenic research with the aim of breading the perfect human race. The brother's interpretation of atrocities like these is irritating: the Nazis are in the centre of attention not as culprits, but in the role of those to be punished. They are attacked by their own breed of super human beings. The border-line between butchers and victims is blurred - the victims become monsters not unlike their killers.

In contrast to the almost incomprehensible complexity of the sculpture, the photographs shock because of the merciless clarity with which the possibilities and fascinations of evil have been depicted. Hell and the works created around the sculpture represent the worldly inferno, the hell of every day life, not the one after death. Because of the meticulous craftsmanship, but above all because of the power and quality of the artistic expression, which fantastic dimensions recall a Hironymus Bosch, Max Wigram, curator of the Royal Academy, has already pointed out that Hell may be one of the most important sculptural works of our time (Sunday Telegraph 6.2.2000). The work certainly underlines one indisputable truths, namely that the true extent of the horrors of war can never be expressed.

What the Hell I - IX was photographed by the renown photographer Norbert Schöner. The photographs were produced in collaboration with the Kunst-Werke.

In addition to the photographic series the Kunst-Werke present Dinos and Jake Chapmans etchings series Disasters of War of 1999. The Cahpmans' fascination with the oeuvre of Francisco de Goya, and above all with his Desastres de la Guerra cycle is long standing. Not only the Disasters of War of the Chapmans, but also several of their sculptural works, as for example "The Great Deed against the Dead" (1998), are based on Goya's epoch-making etchings. The Kunst-Werke are therefore extremely grateful to the Olbricht Collection, Essen, whose generous loan of an original cycle of Francisco de Goya's Desastres de la Guerra has made possible to show for the first time the two series together.

Goya's cycle consists of 85 etching and was created between 1810 and 1816, under the direct impression of Napoleon's occupation of Spain. They mark the first genuine, non-heroic record of war. While Goya witnessed many of the atrocities with his own eyes, the etchings of the Chapmans are based in part on the old master, in part on images which according to them exist in most people's imagination, even if only vague or subconsciously. Other etchings, such as the Pitch of Death, anticipate scenes from the sculpture Hell, thus stressing the importance of Goya's oeuvre in the work of Dinos and Jake Chapman on the whole.

Dinos (*1962) and Jake (*1966) Chapman are among Britain's most successful contemporary artists. The brothers have been working together as a team since 1992. Their works were exhibited in numerous exhibitions, among them in the highly disputed show Sensation, presented between 1997 and 1999 in London, Berlin and New York.

The Dinos and Jake Chapman exhibition is part of the Kunst-Werke exhibition-series media realities, which is generously supported by DG BANK. The KW are also grateful to the Olbricht Collection, Essen, for the loan of the Desastres de la Guerra by Francisco de Goya and to Stephan Landwehr for the framing of the Chapman photographs.