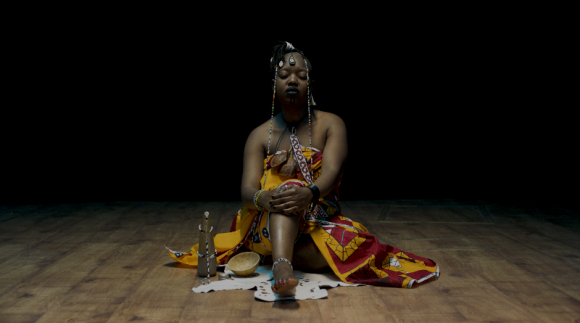 In February and March 2018, Lichtspiele presents the first two installments of artist and curator Kat Anderson’s Episodes of Horror—a multi-part investigation into misrepresentations of black trauma and actual trauma as experienced by black people. Episodes uses the genre of horror to discuss psychical and mental trauma and its potential as an emancipatory tool.

Episodes begins with the premiere of Gudo: A Wounded Spectacle, a new video collaboration between Anderson and Skye Skyetshookii, who is a visual activist, forensic psychologist-in-training, and horror film enthusiast. Drawing on the impact of detention-related trauma experienced by asylum seekers and political detainees, Gudo: A Wounded Spectacle recounts the experiences of Skyetshookii’s own detention as a Zimbabwean gay asylum seeker. The “spectacle” at the heart of the film is multiple, comprising the invasive interrogation of candidates for asylum, the violent imagery of night terrors resulting from repeated exposure to trauma, and the examination of black trauma through the gaze of a camera.

Zimbabwean and based in England, Skye Skyetshookii is a forensic psychologist-in- training, specializing in intimate partner violence, sexual offending and homicide. Skye is also a queer visual activist and self-identified “ancestral wife.” In collaboration with other artists or organizations, Skye uses visual art to interrogate geo-political issues drawn from personal experiences, where “the personal is political.” Currently, Skye places much focus on the narrative of homosexuality and homophobia on the continent of Africa, as well as highlighting issues affecting LGBTQI Africans, asylum seekers, and refugees across the borders.

Kat Anderson is an artist, curator and producer from the UK. Anderson is interested in the politics of black diaspora, black trauma and mental health. Anderson was recently awarded a place on Beyond the Frame, a 22-month professional-development program convened by curator David A. Bailey and the International Curators Forum. From 2015–16, Anderson co-curated Jamaican Pulse: Art and Politics from Jamaica and the Diaspora for the Royal West of England Academy. Jamaican Pulse was an Art Council England National Portfolio project that comprised a major group exhibition of contemporary visual art from Jamaica, North America and the UK, as well as a series of artist residencies, and commissions. The project was developed in partnership with National Gallery of Jamaica (JM), Jamaican High Commission (JM), and the Bluecoat Art Centre, Liverpool (GB).

Episodes of Horror is supported by Arts Council England and by the British Council’s Artists’ International Development Fund.