Book launch:
F.R.DAVID "Take, Eat":
Talk by Andrea di Serego Alighieri
The Source is Rock, the Tongue is Severed: Word Spacing and the Alphabetisation of Silence 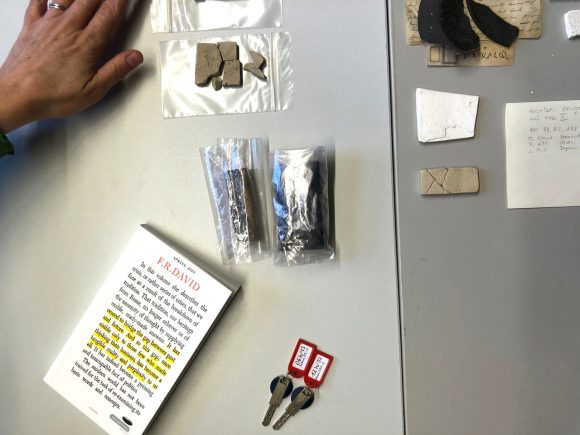 “The Source is Rock, the Tongue is Severed”: Word Spacing and the Alphabetisation of Silence

Presented by Andrea di Serego Alighieri on the occasion of the launch of F.R.DAVID Spring 2022 issue “Take, Eat”.

Andrea’s 20-minute talk was originally delivered online on Tuesday 16 February 2021 at Karlsruhe University of Art and Design. It is organised in two parts, titled Severed Words (murmuring), Talking Stones (singing), as well as a Coda. It explores word spacing from inscription to score, page, screen and voice, studying texts that cannot be grasped optically, in one glance, but rather ask to be contemplated at the rhythm of speech.

The 21st issue of F.R.DAVID, “Take, Eat” is edited by Will Holder, with Andrea di Serego Alighieri. Andrea’s image-heavy talk runs all the way through, on the right-hand pages: the opposite pages contain responses from Will. The issue almost stifles the triangulated space of image, context and commentary; and speaks to the moment between words, things, people, images, perception, past, present and future, between Andrea’s pages and Will’s, as where meaning might breathe.

For KW’s launch-broadcast, Will and Andrea have emulated the editorial of “Take, Eat” playing Andrea’s voice in the right channel, responded to by Will’s addition of RADIANT, by Black Spirituals, in the left channel. (You might want to adjust your settings).

F.R.DAVID is a typographical journal, dealing with the organization of reading and writing in contemporary art practices. It was published by de Appel in Amsterdam (2007–2016) and is currently co-published by KW with uh books.

Andrea di Serego Alighieri (Verona, 1988) works on projects where a focus on writing, language and translation—and the politics thereof—is of central concern. He is the co-editor of “Resistance” (uh books), the publication of a previously unreleased poem by American poet Lyn Hejinian; and translator of Simone Forti’s  L’orso allo specchio (Kunstverein Publishing & Galleria Raffaella Cortese, Milano). Recently he co-edited and authored, with Nicola Masciandaro, Glossator 11 Translation/Commentary: on Cristina Campo (Open Humanities Press, New York), the first bilingual volume wholly dedicated to the work of the poet. He is lecturer in writing and typography, thesis tutor and researcher at the Royal Academy of Fine Arts in Antwerp; and is currently working on a translation and bilingual edition of Amelia Rosselli Laboratorio di Poesia, forthcoming from The Last Books.