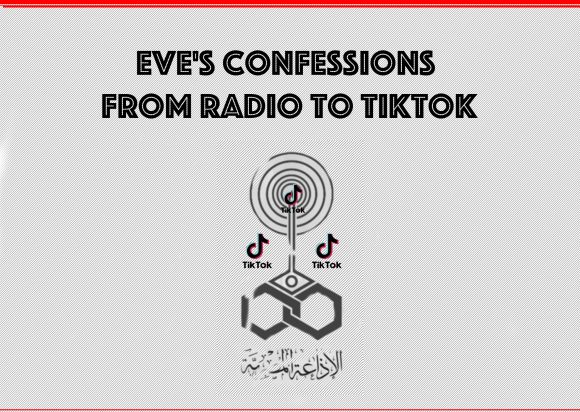 Artists Mahmoud Khaled, Marwa Arsanios, and Mariam Mekiwi will take Eve’s Confessions—a radio play produced by the Egyptian Radio in the late 50s / early 60s—as a starting point to elaborate on how Egypt as a nation-state thinks about women rights in relation to its very own version of “state feminism”. In the play, the main protagonist Rabab is a young ambitious female journalist, who thinks that all men around her are deliberately doing things to control her and ruin her career development, including her editor in chief, until she meets her flirty photographer colleague. The photographer will eventually change all her “radical feminist” ideas and make a good woman out of her, who can serve her family and country better.

Khaled, Arsanios and Mekiwi will discuss how the nation-state used mediums like Radio to marketize their State-Feminism and depoliticize any real women voices or movements, as well as how that nation-state legally deals with the contemporary economies evolving from the content generated by women on social media platforms like TikTok and Twitter, which in many cases ended up in court.

Mahmoud Khaled is a visual artist whose work spans video, photography, sculpture, installation, sound and text. Moving between the scale of the minute and a more immersive totality, his work takes on failure, austere violence and the aesthetics of an institutional heritage. Khaled currently is in Berlin as part of The DAAD Artists-in-Berlin Program.

Marwa Arsanios is an artist, filmmaker and researcher who reconsiders politics of the mid-twentieth century from a contemporary perspective, with a particular focus on gender relations, spatial practices and land struggles. She looks at histories of resistances in their contemporary resonance and approaches research collaboratively.

Mariam Mekiwi is a film editor and filmmaker from Alexandria and currently based in Berlin, where she is an associate fellow of the Graduate School of Arts and Sciences at the University of the Arts in Berlin UdK . She completed her MFA at the University of the Arts in Hamburg HfBk in 2017. Her fiction film “Abl ma ansa – Before I forget” premiered at the Berlinale in 2018 and was nominated to the FIRST STEPS AWARDS in the same year. Her work circulated in various film festivals and art venues like the Sharjah film platform, Oberhausen film festival, Contemporary Image Collective Cairo CIC, Haifa Independent film festival, Hamburger Museum für Kunst und Gewerbe among others.