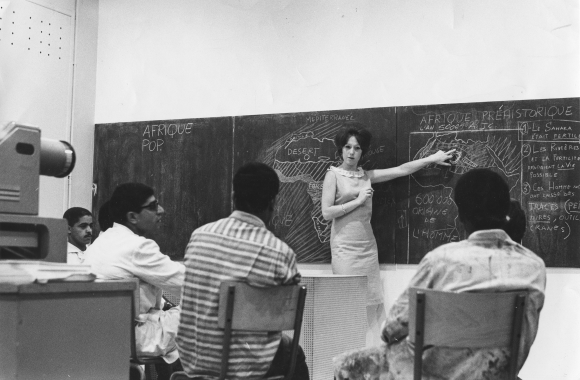 KW Institute for Contemporary Art and Sharjah Art Foundation, in collaboration with Goethe-Institut Marokko and ThinkArt, are pleased to initiate a collaborative venture in 2020–2022 evolving around the approach of the School of Casablanca— a group that developed innovative education and exhibition strategies in Morocco in the 1960s.

Drawing on and interpreting the Bauhaus Manifesto in the 1960s and 1970s, the School of Casablanca engaged models of rethinking the relationship between arts, crafts, design, and architecture within a local context. Recommencing this engagement after the centennial of the Bauhaus, the collaborative venture seeks to further the legacy of the School of Casablanca in contemporary thought. This aim proves to be important not only within a Moroccan context, but also in relation to critical reflection on the traditions of Western methodology and self-perception.

An integral part of the venture is a residency in Casablanca that will take place from 2020 to 2022, during which time residents will conduct research, produce new work, and create a public program focused on the subject(s) addressed in their research. The six invited residents are Céline Condorelli, Fatima-Zahra Lakrissa, Marion von Osten, Manuel Raeder, Bik Van der Pol, and Abdeslam Ziou Ziou.

The collaborative venture will include a conference titled The School of Casablanca: Pioneering innovative strategies for the production and transmission of forms of knowledge—Learning from the legacies of the School of Casablanca today featuring keynotes, talks, and workshops by Rajae Benchemsi, Brahim Alaoui, Nadia Chabâa, Bert Flint, Mustapha Hafid, Mohamed Hamidi, Peter Kortmann, Toni Maraini, Mohamed Melehi, Morad Montazami, and Marcelo Rezende, among others. The conference is realized in collaboration with ifa (Institut für Auslandsbeziehungen) and will be held in Fall 2020 at the École Municipale des Beaux-Arts in Casablanca, Morocco.

For upcoming information on the conference and the project, please visit the website of School of Casablanca.

About the School of Casablanca
Created in the 1920s and officially inaugurated in 1951 by the French protectorate, the École Municipale des Beaux-Arts (Casablanca School of Fine Arts) was an innovative institution in 1960s Morocco. After Moroccan independence in 1956, civic awareness rose, impacting both artists and intellectuals seeking to reconsider their social function and visibility in the public sphere. Through this process, the artist became the producer of a social and cultural project, in which art was expected to become a space of shared knowledge and experience. In the midst of this post-colonial artistic and cultural renewal, artists Farid Belkahia (1934–2014), Mohamed Chabâa (1935–2013), and Mohamed Melehi (b. 1936) formed the Casablanca Group at the Casablanca School of Fine Arts. They were later joined by Mohamed Hamidi (b. 1941), Mustapha Hafid (b. 1942), and Mohamed Ataallah (1934–2014).

Supported by art historian and anthropologist, Toni Maraini (b. 1941), and researcher of popular arts and rural tradition, Bert Flint (b. 1931), the group, now referring to themselves as the School of Casablanca, pioneered innovative and multidisciplinary education and exhibition strategies that rejected the Western academic tradition and epistemology. The School engaged in a number of field-research projects to study and re-appropriate traditional crafts as well as urban and rural architecture. They created the publication Maghreb Art and produced exhibitions in urban spaces titled Présence plastique—the most memorable act of which remains the 1969 manifesto exhibition in Marrakesh’s Jamaa el Fna Square. During the 1960s, and over the following decade, the School of Casablanca realized important architectural projects for public infrastructure—termed Les Intégrations—in collaboration with architects Patrice de Mazières (b. 1930) and Abdeslam Faraoui (b. 1928).

KW Institute for Contemporary Art is institutionally supported by the Senate Department for Culture and Europe.

The School of Casablanca is initiated by KW Institute for Contemporary Art, Berlin, and Sharjah Art Foundation, Sharjah, in collaboration with Goethe-Institut Marokko and ThinkArt, Casablanca.

The conference School of Casablanca: Pioneering innovative strategies for the production and transmission of forms of knowledge—Learning from the legacies of the School of Casablanca today is realized with additional support of ifa (Institut für Auslandsbeziehungen), Berlin/Stuttgart.