Beatrice Gibson
What’s Love Got To Do With It? 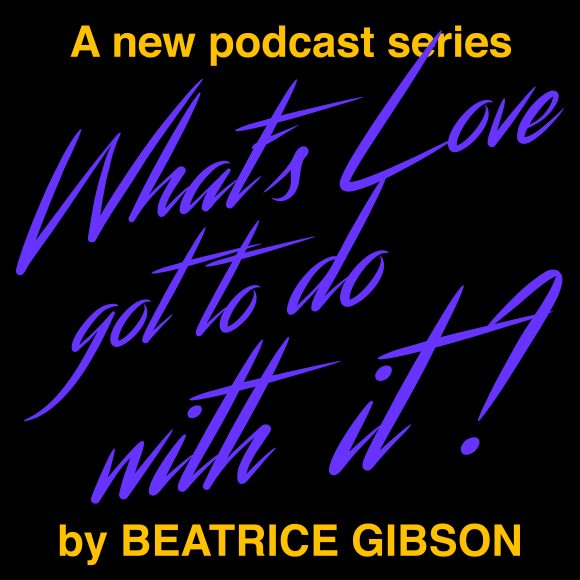 Gibson’s poetic reflections and citations on friendship, disobedience and love are at the heart of her forthcoming feature film, two recent films, I Hope I’m Loud When I’m Dead (2018) and Deux Soeurs (2019), and latest book Deux Soeurs (2020). In each instance, Gibson turns to the figure of the poet as a guide in times of chaos. What’s Love Got To Do With It? extends this entreaty by staging direct and explicit discussion between poets themselves. These conversations present lyrical responses to the current climate, find collaborative intimacies to inspire resistance and transformation, and share poetic knowledges.

The episodes of the new podcast series will be released on 4, 11, and 18 September 20 on the websites of KW, Bergen Kunsthall, Camden Art Centre and Mercer Union, and will be available on all main podcast platforms.

What’s Love Got To Do With It? is programmed and curated by Beatrice Gibson, produced by Alannah Chance, and features unique compositions by Crystabel Riley and Seymour Wright. It is a commission by Bergen Kunsthall; Camden Art Centre, London; KW Institute for Contemporary Art, Berlin; and Mercer Union, a centre for contemporary art, Toronto.

Episode 1 with CAConrad
and LeAnne Howe

Poets CAConrad and LeAnne Howe share an intensely personal conversation with one another about First Lady Mary Todd Lincoln, who insisted she was tormented by an Indigenous Spirit—a reminder that her husband’s record on racial equality is fraught with violence and oppression; AIDS and loving during the Reagan years; and the new horizons created by the Black Lives Matter movement. Woven through with recitations of their own poetry, the pair reflect upon each other’s work, growing up with death, and radical love in its many forms.

CAConrad is the author of nine books of poetry and essays. While Standing in Line for Death (Wave Books, 2017) won a 2018 Lambda Book Award. They also received a 2019 Creative Capital grant as well as a Pew Fellowship in the Arts Award, the Believer Magazine Book Award, and the Gil Ott Book Award. They regularly teach at Columbia University in New York City, and Sandberg Art Institute in Amsterdam. Their books, essays, recordings, and the documentary The Book of Conrad (Delinquent Films, 2015) are available online at http://bit.ly/88CAConrad

LeAnne Howe is an enrolled citizen of the Choctaw Nation of Oklahoma. She is the Eidson Distinguished Professor of American Literature in English at the University of Georgia. Howe is the author of novels, plays and poetry, and her awards include: the American Book Award, Western Literature Association’s 2015 Distinguished Achievement Award; the inaugural 2014 MLA Prize for Studies in Native American Literatures; and a 2012 United States Artists Ford Fellowship, among others. During the Arab Spring, 2010–2011, Howe was a Fulbright Scholar at University of Jordan, Amman. Her most recent book, Savage Conversations (Coffee House Press, 2019), is the story of Mary Todd Lincoln and the Savage Indian spirit that Mary claimed tortured her nightly.

Poets Alice Notley and Precious Okoyomon converse together for the first time to discuss how they tune into interconnectedness, why dreaming together might forge collective states of belonging, and ask each other how love moves them and the world. Sharing their poetry and its rootedness in their personal histories – as well as their hopes for the future – Notley and Okoyomon render visions of intergenerational lives in continuous acts of translation.

Alice Notley was born in Bisbee, Arizona in 1945 and grew up in Needles, California, in the Mojave Desert. She has lived most extensively in Needles, in New York and, since 1992, in Paris. She is the author of numerous books of poetry, and of essays and talks on poetry, and has edited and co-edited books by Ted Berrigan and Douglas Oliver. She edited the magazine CHICAGO in the 1970s, and co-edited with Oliver the magazines SCARLET and Gare du Nord in the 1990s. Notley is the recipient of many awards, mostly recently the Ruth Lilly Prize, a lifetime achievement award. She may be most widely known for her epic poem The Descent of Alette. Recent books include Eurynome’s Sandal, Benediction, and For the Ride.

Precious Okoyomon is a queer poet, artist, and performer living in New York. She is the author of Ajebota (Bottlecap Press, 2016) and But Did You Die (forthcoming from Birds LLC). She has read and performed at The Kitchen and Artists Space in New York, and Serpentine Galleries in London. Her work examines a history of the criminalisation and racialisation of light, darkness, and the sun (which Okoyomon believes to be indisputably black.)

The final episode of this podcast series is a conversation between two friends: Ariana Reines and Sophie Robinson, poets and educators who look to spaces of hospitality for connection and kinship. Sharing their poetry and the experiences that shaped its writing, the pair discuss possibilities for care despite institutional cruelty, getting sober as an act of radical love, and how the Sun and Moon communicate very different and sometimes uncomfortable truths to Reines and Robinson respectively.

Ariana Reines is a poet, performing artist, and Obie-winning playwright. A SAND BOOK (Penguin, 2020) won the Kingsley Tufts Prize and was longlisted for the National Book Award and a Lambda Literary Award. She writes regularly for Artforum and runs INVISIBLE COLLEGE, a vibe on the internet for artists and poets and anyone really. Her work has been translated into many languages. She has been doing what she can all over the world for over ten years.

Sophie Robinson is a poet and prose writer. She teaches poetry at the University of East Anglia, Norwich. Robinson is the author of Rabbit (Boiler House Press, 2018) and The Institute of Our Love in Disrepair (Bad Press, 2012). Her writing has appeared in n+1, The White Review, Poetry Review, The Brooklyn Rail, Ploughshares, BOMB Magazine, and Granta.