For all KW events the 3G rule applies (vaccinated, recovered or tested). Wearing a medical or FFP2 mask remains mandatory. 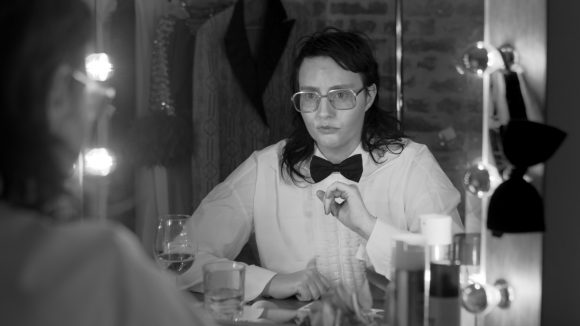 Three Possibilities Walk into A Bar. A Lover, an Entertainer, and a Revolution is an evening hosted by choreographer and visual artist Melanie Jame Wolf, during which they will screen a selection of their recent moving image works, including Acts of Improbable Genius (2021) and Understudies (2021). They will frame these films with performances of select new and existing texts as an experiment with the meta-theatrical underpinning of their practice: performances about performance, works about work, shows about shows.

These films and writings follow Wolf’s ongoing interest in analyzing the idea of performance-as-labor in artistic, popular entertainment, and everyday contexts; atomizing specific performance techniques–among which impersonation, rehearsal, stand up–as a lens to critically analyze broader political and cultural currents. Performance here is understood as a technology of survival; as a strategy for fluidity of subjectivity. Approaching moving image, installation and text as an expanded choreographic practice, Wolf’s work plays along a continuum of the sublime and the ridiculous. Leaning into a hyper-stylized pop aesthetic, they are invested in humor as a strategy for critical possibility, and in working with language in subliminal and surprising ways.

Three Possibilities Walk into A Bar is a long form toast to shape shifting.

Melanie Jame Wolf works solo and with friends, making interdisciplinary pieces about power and flows of immaterial capital. They examine these economies and entanglements in works for gallery, theater and screen spaces. Coming from a background in contemporary performance, Wolf works with text, sound, moving image, choreography, & textiles. Their work is concerned with the poetics and problems of ghosts, class, pop, sensuality, gender, narratology, and the body as a political riddle.