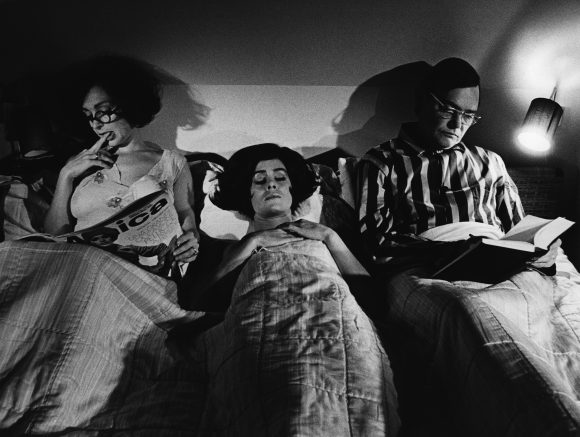 Duet for Cannibals is the 1969 directorial debut of essayist, novelist, critic, cinephile, intellectual, and pop cultural icon Susan Sontag (1933–2004)—a definition-defying, dryly funny psychological drama-comedy she made upon a Swedish film studio’s invitation to make a film in Stockholm. The plot revolves around the quadrangular relationship between Dr. Bauer (Lars Ekborg), a leftist-decadent German intellectual in exile, his younger Italian wife, Francesca (Adriana Asti), Tomas (Gösta Ekman), whom Dr. Bauer hires to edit his diaries, and Ingrid (Agneta Ekmanner), Tomas’ girlfriend. What at first appears to be a bourgeois, decadent game of partner-swapping—in which the older couple subjects the younger to game-like dares, seduction, and power plays—gets more and more out of hand, gradually shifting into the surreal and violent and, possibly, into murder. By defying any clear-cut literal interpretation, Duet for Cannibals reads as a dialogic counterpart to Sontag’s criticism, recalling what she herself identified as the “most vital, most exciting” qualities of film in Against Interpretation (1964) or in this note on Bergman:

“Images and dialogue are given which the viewer cannot help but find puzzling, not being able to decipher whether certain scenes take place in the past, present, or future; and whether certain images belong to ‘reality’ or ‘fantasy.’”
– Susan Sontag on Ingmar Bergman’s Persona, 1966, for Sight & Sound (1967)

At Pogo Bar, KW present a version of the film that has been newly restored in 2018 by the Swedish Film Institute.