Limited capacity, please RSVP to reservation@kw-berlin.de prior to the event.

Semi-public seminar with Diakron (DK) and Sam Hart as the second part of Rachal Bradley’s program series The Erotics of Infrastructure taking place from 29 October – 8 November 19 at KW. 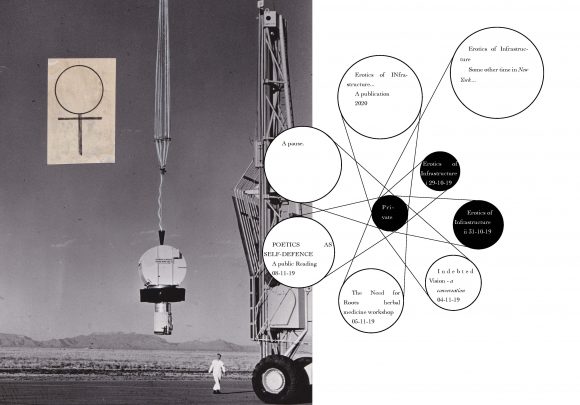 This semi-public seminar brings together participants from Part I with two new positions to expand on the topics carved out in the first seminar and introduces new aspects of the conversation on and around infrastructure. Participants from the first part give way to new while the former sit as a Chorus in the forum, besides the public audience (and KW’s permanent employees) who is invited to partake in the discussion.

Scholar Aslak Aamot Kjærulff from Diakron, a Copenhagen based studio for transdisciplinary research and practice, will introduce his work with developing ‘Primer’. Primer is a platform for artistic and organizational development, developed in collaboration with Aquaporin, a global water technology company. Aquaporin develops water purification technologies, utilizing the water channel protein named aquaporin. Primer is a learning experiment, with the mission of exploring what we might learn from crafting new processes across a research-driven technology company and a network of artists, social scientists, philosophers, and more, engaged in discussions of techno-diversity.

Sam Hart is a scientist, strategist and editor working across computational biology and distributed publishing. His current research critically examines the evolutionary metaphor in technological development and the organizational logic of markets.

The Erotics of Infrastructure:
Poetics as Self Defence
8 November 19, 8 pm